“Troot in the Shed 2020” is under way with the first batch of eggs delivered to the Sanday School! It only took a 15mn drive from the hatchery to the airport, followed by a 20mn flight onboard our local Islander plane to get the ova to their destination. As the ova have to travel in  a thermos flask to reduce thermal variations and in order to avoid any vibrations which could damage the embryo, the bottle traveled on my lap! 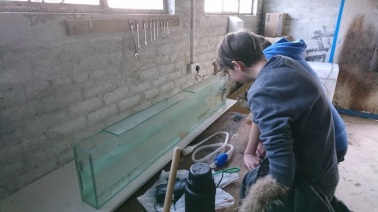 Once on Sanday, Macey and Jack took over. They collected water from the local burn, filled up the tank set in the school shed, fitted the water pump and released the eggs in the tank. Two ova were dead on arrival and it was a good opportunity to show the two boys how to remove a dead ovum with a pipette.

A few more eggs might yet pay the price for the bumpy flight they experienced but after a couple of days, losses should be minimal.

There was a cold West wind on the first day and the 14 young anglers fished the SW shore. The trout were not very active, probably due to the cold wind, but the young anglers still managed to catch 7 trout with David Cowieson being the most successful with 3 fish.

Hopes were high for the competition day, when the forecast NNW wind would allow fishing on the usually more productive East shore. However, it proved to be the least productive day in the 40 year history of the competition. Very few fish were caught by the adults fishing fly and only one trout was caught by the young competitors. Reece Lowe’s one small trout won him the Orkneyinga cup for senior bait and also the W Shearer cup for largest fish. The only other fish caught was a stickleback, hooked by Erlend Muir.
No fish were caught on fly lines and the WS Sinclair cup was again unclaimed. This is the first year in seven that the new Bobby Windwick cup for Junior Bait has not been won.
The loch was very low, despite the recent rain, which has raised the level of all the other Orkney lochs. Perhaps Scottish Water have opened the sluice to allow work on the dam or fish ladder . The low level may have resulted in the trout moving into the deep water, well away from the shore. The cold and quite strong North wind didn’t help.
All the competitors received prizes or gifts donated by WS Sinclair and Stockans. W Shearer provided discounted packs of floats, hooks and worms for the young anglers. As usual, OTFA will pay for memento trophies.
KGS Depute Head Neil Ewing organised and supervised the 2 days of angling, helped by KGS staff Andy Torbet, Phil Lonley, Joe McCall, David Fletcher and Lynn Wilson. Lynn enjoyed catching her first trout on fly and bubble.
The KGS pupils all persevered, despite the poor fishing. They are now much more proficient at assembling tackle, tying knots, casting and preventing or untangling fixed spool fankles . They should have more success if they have the opportunity to fish some of the other lochs in Orkney.
JE

The sun was out and the Meikle Water was flat as a mill pond when the day had come to release the trout alevins hatched in the school shed between February and April.

Jamie was in charge of “Troot in the Shed” this year and he managed to successfully run the project with minimal loss! The eggs and fry were checked on a daily basis as it is critical to remove any casualties from the tank before the water quality starts degrading. The simple set-up we have in school doesn’t allow us to feed the fry once their yolk-sacs have been reabsorbed, so they need to be released without delay.

However, one can ‘t just hatch any fish and release them in the wild… We have to go through a very strict application process and submit our paperwork to Marine Scotland who will consider several criteria such as the species and size of fish, the origin of the broodstock, the receiving water, etc… If Marine Scotland consider the introduction as safe, we get issued with a « stocking consent » which allows us to proceed.

So, with the « stocking consent » in the bag,  Jamie, John and Mr Pietri walked to the loch on the last day of term and carefully released about a hundred unfed fry into the Meikle Water. Mrs Rose had generously provided us with fine mesh nets and trays to sample the bottom of the loch for invertebrates and mollusks which the trout might come to feed on at some point… Food was scarce, so early in the season, but there’s no doubt the fry will grow into very healthy brown trout! 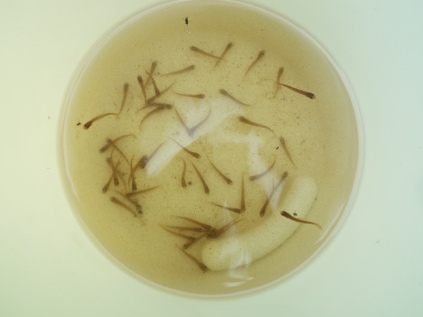 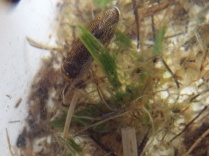 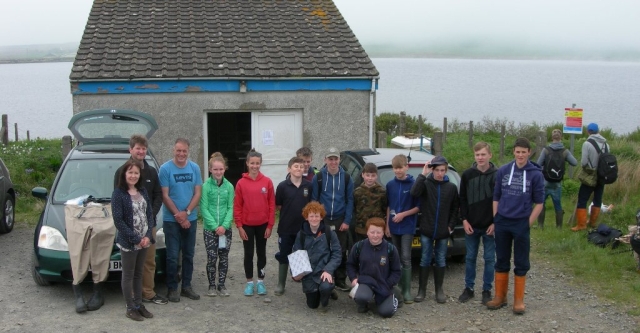 There were non-competition trips on the previous 2 days. Despite the difficult, very sunny, light wind conditions, some good fish were caught, including a 17 oz brown trout and a couple of sea trout weighing 9oz and 23oz.
On the competition day, the forecast light SE wind and cloudy sky didn’t occur and instead it was sunny again, with the wind freshening and veering to SSW. The young anglers therefore had to cope with casting into the wind on the lee shore. The trout were much less active than on the previous 2 days and were far out from the shore.
Reece Lowe won the Junior Bait section and the Bobby Windwick cup with 2 trout weighing 14.4oz. Ade Sclater came second with a trout weighing 9.4oz.
The Senior Bait section and Orkneyinga cup were won by Brian Elder, who weighed in 2 trout totalling 1 lb 3oz. Liam Barnett was second with a 6oz trout caught on fly and bubble (allowed in the bait section). Brian was also presented with the W Shearer cup as he had the largest fish, weighing 12.9oz.
No fish were caught on fly lines and the WS Sinclair cup was therefore not claimed.
All the competitors received prizes or gifts donated by WS Sinclair and Stockans. W Shearer provided discounted packs of floats, hooks and worms for the young anglers.
KGS Depute Head Neil Ewing organised and supervised the 3 days of angling. KGS staff Andy Torbet, Simon Hall, Kay Hume, Joe McCall, David Fletcher and Gemma Harcus gave assistance to the young anglers and helped at the weigh in.
Although they didn’t all catch fish, the KGS pupils all worked hard at developing their angling skills and are now much more proficient at assembling tackle, tying knots and especially casting. Perhaps some of their parents or relatives will take them on angling trips to Kirbister or other lochs, when the weather conditions are more favourable.
JE

The Sanday School release their trout!

As explained in previous posts, the Sanday mini-hatchery was, this year, subjected to the vagaries of the Orcadian winter and boy, wasn’t it an interesting one…

By early-March the floating basket containing the ova became encased in 6in. of ice for a few days! This doesn’t sound too unusual for many parts of the country but Orkney winters tend to be much milder as can be seen on the graphs below:

By the time the thaw came, nobody was expecting the fragile trout eggs to have survived the freezing conditions! However, we had underestimated their resilience and forgotten that brown trout did thrive in Britain through the various ice ages when they certainly would have been confronted to much nastier weather conditions! This was a very pleasant surprise and during the weeks which followed, the alevins reabsorbed their yolk sacs and were ready to be released in the wild by the end of April, nearly a month later than in the previous years.

As we were by the Bea Loch in early spring, it was a good opportunity to do a bit of “kick sampling” with fine mesh nets and find out what our trout would be feeding in the years to come. The pupils caught huge amounts of freshwater shrimps (Gammarus), water boatmen (Corixa) and even a stickleback, which shows how rich those North Isles lochs are! 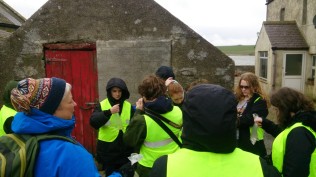 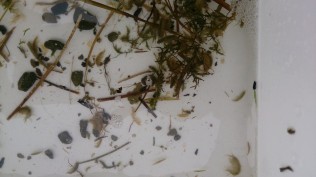 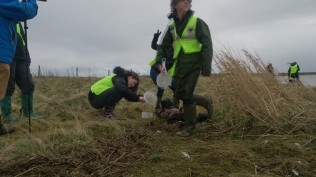 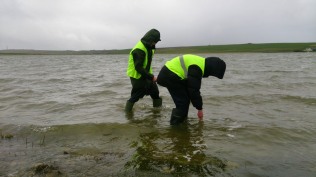 Here’s a short video filmed by the pupils showing a typical routine check of our mini brown trout hatchery: water temperature reading, removal of dead ova, solar pump check, water level, etc…
The mini hatchery is located outside and submitted to the changing weather conditions as opposed to the Stronsay set-up,located in a shed at a more constant temperature. This explains why, the Stronsay ova have all hatched by now whereas they haven’t started yet on Sanday.

The Stronsay ova are hatching!

Johnny and Jamie noticed today (22/02) that there seemed to be less and less ova visible on the mesh tray in the tank… We discovered why just before dinner when we realised that they had all pretty much hatched and found their way under stones and gravel just like they would in the wild, to keep away from predators and strong currents.
The boys used a small waterproof action-camera to record the first moments of those little trout’s lives! It was a good opportunity for them to learn how to use Movie Maker and edit their video clips.
Here’s the one that Johnny made earlier…

This is a short video of the mini-hatchery set-up at the Stronsay School:

I’m glad to say that our mini-hatchery project is back at the Stronsay School for the 7th year! For this session, most of the supervision and maintenance of the ova will be covered by Jamie and Johnny; they also attend the AFYD (Angling For Youth Development) classes and their interest and expertise in “trouty” matters will insure the project is a success!

The fertilised ova were delivered last week and so far, only 3 dead eggs have been removed. They were probably ova which became damaged during collection at the hatchery or even during transport in the thermos flask on-board the Loganair Islander during a particularly bumpy flight last Friday!

The set-up for our hatchery remains very similar to the one used in the previous years (dark shed with no heating source). However, the old hand-made tank gave up the ghost at the end of the 2016 session and we are very grateful to the Stronsay Development Trust for funding a replacement for our equipment (new tank, pumps and nets).

More photos and posts to come as the ova develop…

After a gap year, due to problems in collecting ova during the 2016-17 season, “Troot in the Shed” is back and 2 Orkney schools will be able to hatch their own brown trout ova before releasing the alevins in the nearby lochs.
On Tuesday 30th January, Mr Pietri collected fertilised ova from the Kirbister Loch hatchery and delivered them to the Sanday School which was well prepared to the occasion!
Part of the school’s “Rich Tasks” , it was decided that we would run “Troot in the Shed 2018” in slightly different conditions from the previous sessions. Instead of hatching our ova in a shed, we are going to try and hatch them outside in a rain water-fed butt. A wooden box with a mesh bottom has been designed and assembled in class under the supervision of Craft & Design Technology teacher Ms Dixon and it’s been fixed to the butt so that the eggs are covered by 3 or 4 in. of water. A lid keeps the ova in the dark, to replicate the natural conditions, as if they were buried under the gravel of a stream, and when the days start to warm up, a solar panel air pump will provide extra oxygen to maintain a healthy water quality. 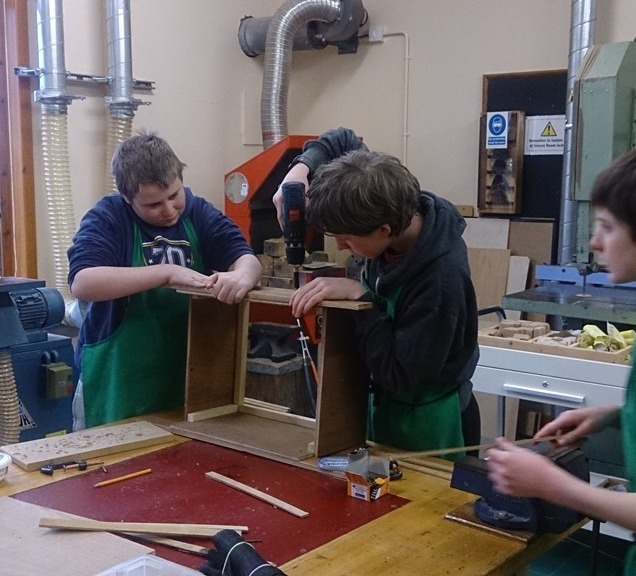 Releasing the ova into plastic pouch to avoid thermal shock with the colder water from the butt. 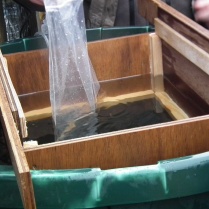 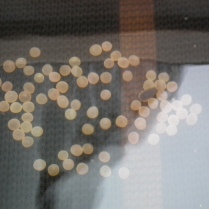 Posted in Uncategorized | 4 Comments
Troot in the Shed
Blog at WordPress.com.
Loading Comments...